I often disappear from this blog, but this last one was a doozey.  My last post was December 2012, and it’s now May 2014!  Shocking abandonment, I know.  What have I been doing with myself for all that time, you ask?

Well I was a little busy, and the end result is that basically I made another person.  The Husband helped a little. 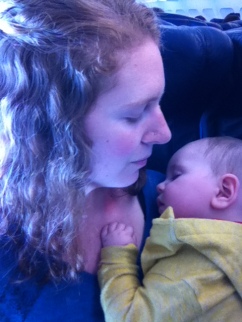 Yeah, I made that.

I wish I was one of those people who could obsess over several things at once, but sadly I am not so disciplined.  I got pregnant in January 2013 and started being obsessed with all things baby-related, researching everything from what I should be eating, what we should be buying (or not), and just generally what we had gotten ourselves in for.  The Munchkin was born in October, at which point I realised that 99.9% of that research was a pile of nonsense.  Now, six months later, I finally have gotten to the point where things have calmed down somewhat, we’re getting some decent sleep (finally!) and I have begun to have some free time in the regular intervals that are Nap Time.

Oh, Nap Time, a most sacred time indeed.  Those who dare to disturb the peace during Nap Time shall forever rue the day, as I operate a strict “You Break It You Buy It” Policy.  In other words, if you wake up my child then you get to be handed a screaming infant and told to “FIX IT!!”  I wonder if the postman has any idea just how close he’s come to being given temporary custody of a six month old.

But I digress.  I’m finally feeling mentally sound enough to start writing again, so here I am, back from the dead, with new ideas and determination.  Also feeling the extra pressure to finally finish something, as my maternity leave has ended and with it my paycheques.  Sadly child care costs make my fabulous job untenable, as I’d be paying out about the same per day as I’d be earning and that’s just ridiculous.  So unless I can find a job which magically fits around the constrains of my new responsibilities, I’m calling myself a self-employed full-time writer.

I’m hoping that by using this blog as a tool to make me write every day, even just in my usual wittering way, I’ll start to regain discipline again.  So watch this space for various rants on various random subjects, some of which might actually have something to do with writing.

This entry was posted in Real Life?? What is that?! and tagged nap time, not dead, procreating, ranting, wittering, writing, you break it you buy it. Bookmark the permalink.