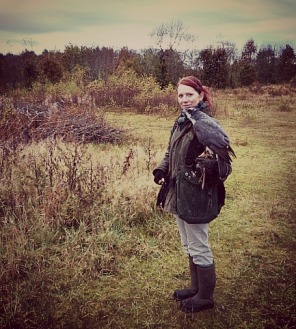 Arielle K Bosworth has been seeking refuge in books from an early age, first as a reader and then as a writer. She has started countless writing projects since she was a small child (and was once published at the age of 6 in a collection of children’s poems) but only finished a few and is happy with none. This blog is mainly a place for her to rant about the writing process and her eternal struggle to Get Shit Done and Finish Things. She has worked in a lot of different and unusual jobs such as a stablehand at a Clydesdale stables, a pony ride handler, a vet technician, a dental receptionist, she has sold used books, jewelry, minerals and fossils, and her latest job was a bird of prey demonstrator at a wildlife park where she once scared Nicole Kidman with a very large owl. She was born in Boston, USA, but currently resides in central Scotland with her husband, young son, and their crazy collie dog.  She loves eating cheese (though she’s lactose intolerant), enjoys rambling across the countryside, and is passionate about the ancient sport of falconry.  She has hunted with a male goshawk for several seasons, pictured above, known affectionately as the Old Man because of his advancing years.  They haven’t caught much, but have enjoyed the pursuit.

Using all of these strange and varied life skills, Ari attempts to write works of science fiction, fantasy, and things which can’t be contained in a single genre alone.  Her most recent completed work was a steampunk time travelling short story, The Adventurous Time Adventures of Dr When.  Many unfinished works have been started, and abandoned, since then but she just finished her first draft of this year’s NaNoWriMo project, Bestial, a retelling of the fairy tale Beauty and the Beast, with an aim to edit and polish it to a glowing shine, and then try to finally share her life’s work with the wider world.